Chimney sweeping using slaves or low paid labour goes back a very long time indeed, some of the first references to chimney sweeps were in Roman times before the time of the times of Christ so we are talking BC not AD.
Roman swimming pools and baths were build on top of an underfloor heating system called a hypocaust, this was basically an intricate chimney with an associated stack. This was an ingenious method of heating a pool but of course being essentially a big wet stove burning lots of wood it needed its flue ways cleaning. In those days a specific chimney sweeping slave was used. They would be slim and petite and able to fit in the crawl space beneath. Life was very short for these people. If someone died during the work the body was often left for the next chimney sweep to clean out.

Moving through the ages of course the romans left Britain but their legacy remained. Chimney sweeping remained the job of the lowest paid or that of forced labour. Typically using children due to their small size and because they simply didn’t eat very much and did what was demanded of them.

It was typical for chimney climbing boys to die before adulthood they would spend their short lives hungry and working inside of hot black chimneys filled with acidic soot with no protective clothing and often no shoes while their master or owner would live a life of relative luxury. There are stories of young chimney sweeps being forced into chimneys that are in use and of cruel masters that would pin or burn the feet of those who refused to climb.

In the unlikely event a chimney climbing boy would grow too large for the chimneys they had to fit within they would have simply been discarded to starve and replaced with a new smaller younger version. Maybe they would be lucky enough to live out their days in the workhouse.

Although this blog is mostly from an English perspective this brutal trade was not isolated within the uk, in fact it was the norm in the United States and all across Europe. I m just not privy to the law changes in those countries so cannot speak knowledgeable on it.

There are several important historic dates that document the beginning of the end to the chimney climbing boys in Great Britain and a slow change towards where we are today.

In 1788 According to the professional chimney service in London and South Essex, Clean Sweep, there was a bill passed in parliament decreeing that no child under the age of eight years would be allowed to be used for the purpose of chimney climbing and cleaning. Unfortunately this was almost completely ignored. Around 1800 a pressure group was formed the society superseding the need of the climbing boys. This group set about pushing the design of brushes and rods as a viable alternative to children and lobbying parliament. 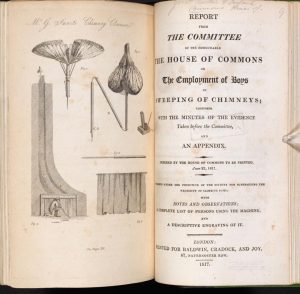 1834 A new act was brought into law stating that a child must express his own desire in front of a magistrate to be a chimney boy or chimney sweeper and is willing to work for his employer.

In 1840 an act of parliament was passed to stop the forcing or compelling of anyone under the age if 21 to sweep or climb chimneys and shafts. It led to the local police becoming empowered to licence local chimney sweeps so that it was illegal to trade in England without first gaining a licence. One such original licence can be seen below thanks to mr Rob Wildgoose. 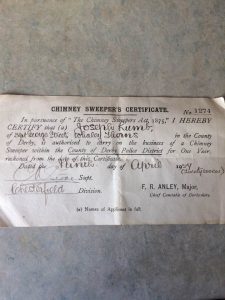 1875 was the date parliament brought about the end of the chimney climbing boys and a brutal trade in children officially ended. Is followed the death of a young climbing boy in London’s Shaftesbury hospital.

As you can see our now fun and interesting job was once a story of brutal slavery. The next time you complain about the extra paperwork, the health and safety hoops we have to jump through or even the long winter days, take a moment to reflect how lucky we are to have been born in more recent times.

8 Responses to “The brutal history of the chimney climbing boys”